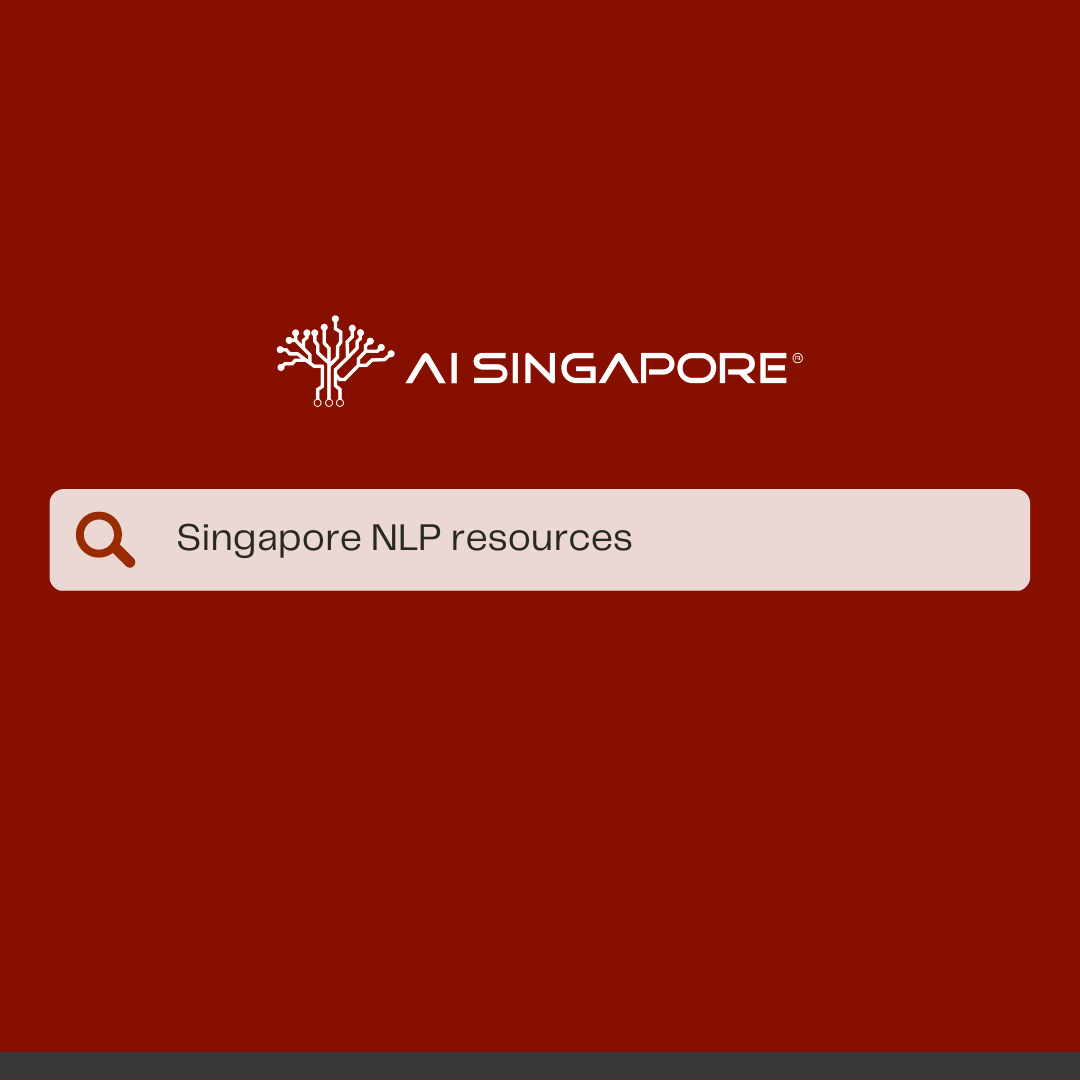 Officiated by the Minister of State for Education and Manpower, Ms Gan Siow Huang, the programme is supported by the Ministry of Education (MOE)’s STEM and Innovation & Enterprise (SIE) Promotion Funding Initiative. This is the latest development to AISG’s continual efforts towards developing Generational AI Capability and nurturing a strong AI engineering talent pipeline in Singapore, which is projected to require another 1.2 million digitally skilled workers to meet the demands of the digital economy by 20251.

Laurence Liew, Director of AI Innovation at AI Singapore said, “As implementation of AI continues to accelerate, there is a need for us to develop nationwide AI literacy and develop meaningful learning experiences that ensures a mastery of AI skills to meet the demands in our digital economy. As we continue to align our efforts with Singapore’s Smart Nation ambitions, we have enabled over 74,000 Singaporeans to gain AI literacy through our programmes to date. With this newly launched AI Student Outreach Programme, we look forward to nurturing the next generation of AI practitioners and help them unlock career opportunities in STEM industries.”

A progressive and self-paced online curriculum

The programme offers three levels to suit different AI proficiencies – Beginner, Intermediate and Advanced which can be completed via self-paced online learning, offering greater flexibility for full-time students. Interested participants must first form Student User Groups (SUG) with a minimum of ten members from the same educational institution to complete each level. The teams are given access to AISG Community Groups as well as monthly Ask-Me-Anything sessions to support their learning, networking, and career development.

Through the three levels, the students can pick up programming skills like Python and R, explore machine learning topics such as deep learning, develop statistical thinking and critical thinking skills needed to navigate the changing world.

Following an early engagement held by AISG in April 2022, there are currently 47 SUGs formed with more than 1,100 members registered for the Beginner or Intermediate levels. This indicates a strong desire among students who aspire to master practical knowledge in a fast-moving field like AI, beyond their existing curriculum.

Working with industry partners to provide a headstart in STEM careers
Each level of completion offers certification for students to formalise their achievements and demonstrate to future employers their proficiency in AI. This includes an industry-recognised certification offered by Google Cloud – the Google Professional Machine Learning Engineer Certification – for 500 successful students every year who have completed the Advanced level.

Additionally, 21 students per year will have the opportunity to participate in a three to six-month paid internship alongside AISG’s engineers and apprentices to work on real-world industry projects with deployment deliverables under AISG’s AI Internship Programme (AIIP). Centre for Strategic Infocomm Technologies (CSIT) is the first partner on board this programme and will be providing projects and a monthly stipend for the interns. Under the joint internship programme, there will be dedicated technical mentorship under which interns will learn to apply their know-how on practical challenges and be exposed to possible career opportunities in the defence science and technology sector.

Laurence added, “To cater to the growing demand for an AI-skilled workforce in Singapore, AI Singapore will continue to offer access to AI education and skilling opportunities to Singaporeans, regardless of age, gender, and economic status. At the same time, we will work closely with industry partners to identify budding AI talents and prepare them for the workforce of the future.”

Applications for Beginner and Intermediate levels are open all year round. Interested applications can first apply to form their Student User Groups here. The next application period for Advanced level opens from 1 to 31 August 2022 and 1 to 31 January 2023.

More information on the programme can be found here.

CSIT is honoured to be AISG’s inaugural partner in the AI Internship Programme to nurture and grow the future generation of AI professionals in Singapore. As a technical agency in MINDEF that uses digital technology to meet the nation’s security needs, we have a deep interest in the application of AI in areas such as cyber defence and countering hostile information operations. Through the AIIP, we hope to nurture interest among young talent in the use and further development of AI for application in Singapore's security.
Seow Tein Heik Group Director of Digital Products, CSIT
AI and ML will continue to have a powerful impact on every aspect of our lives, from improving disease prevention to helping retailers better engage their customers and everything in between. To ensure that Singapore has the skilled talent to continue applying these transformative technologies at scale, we are proud to be supporting the AI Capability Development initiative and providing the curriculum that Google uses to train our own technologists to solve high impact business challenges. In partnership with AI Singapore and the Ministry of Education, we look forward to helping more Singaporeans establish and showcase their proficiency in in-demand digital skills to prospective employers, to kickstart careers in technology and advance local organizations’ digital transformation strategies and initiatives.
Sherie NgCountry Director, Singapore and Malaysia, Google Cloud
Previous
Next 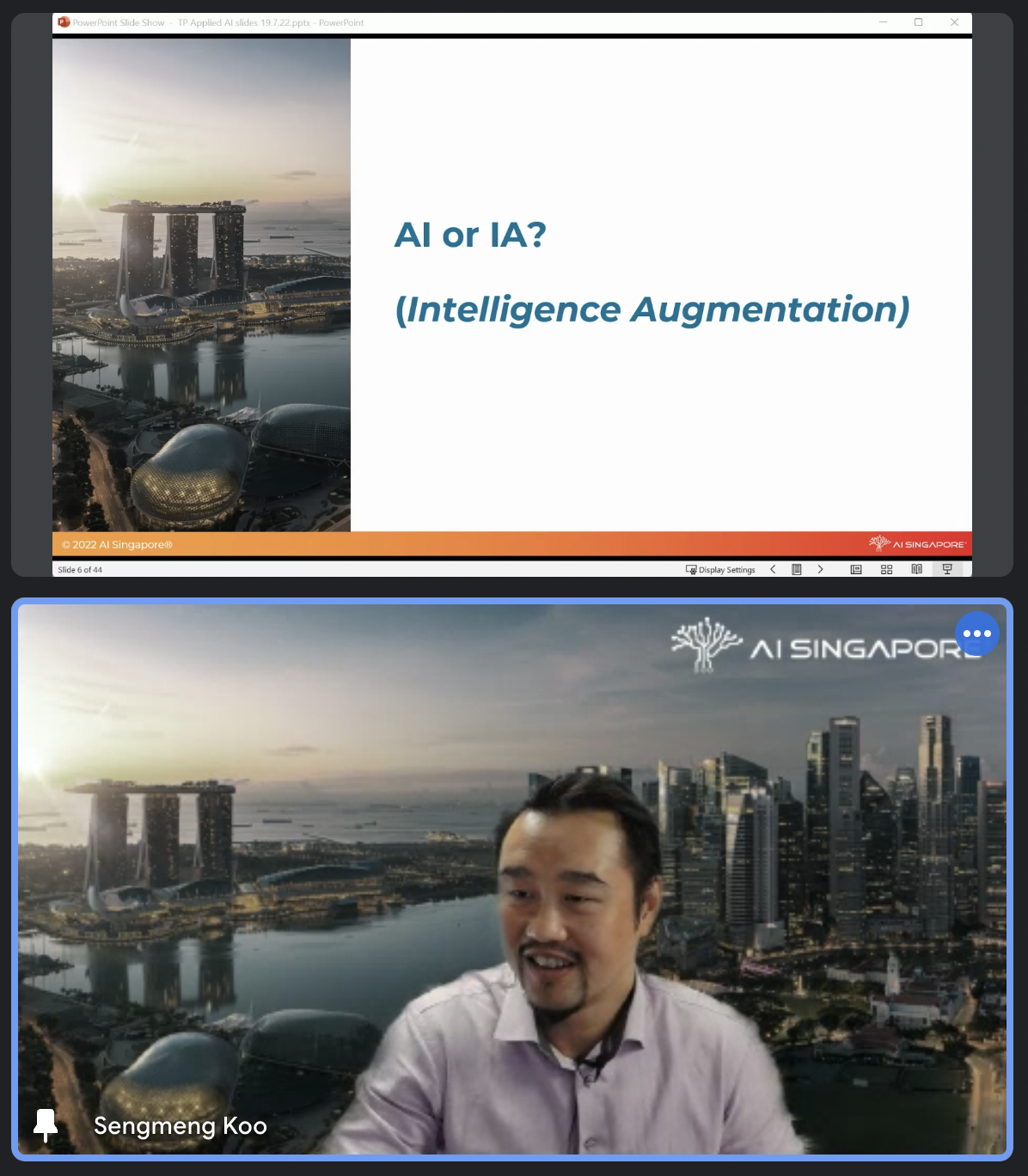 Since the introduction of the GPT-3 large language model (LLM), a new deep learning paradigm called ‘prompt engineering’ has been gaining popularity. In this article, our 17 year old AI Singapore intern, Liew Wei Pyn, from NUS High School of Math and Science, implemented a solution for a paraphrasing downstream task using a technique called ‘Prompt Tuning’ to generate soft prompts with an OPT-1B3 (1 billion parameters) pre-trained model from Meta.

Open Pre-trained Transformer (OPT) models are a collection of open source decoder-only pre-trained transformers by Meta AI ranging from 125M to 175B parameters, with 175B showing comparable performance against Open AI’s GPT-3. Such large language models display remarkable performance in zero and few-shot tasks, which prompts a promising solution for many tasks due to its capability of coaxing a large model into solving tasks they were not explicitly trained to do.

The task that we are trying to accomplish is to prompt OPT models into paraphrasing sentences. The task of paraphrasing is traditionally a sequence-to-sequence task accomplished using encoder-decoder transformer architectures (such as BART). However, there is still some promise in leveraging the large pre-trained decoder-only models like OPT, whose capabilities to model natural language may overcome the architectural limitations.

However, throughout the course of this experiment, we only work with OPT1.3B, a much smaller variant of the OPT175B model. As such, the results will not be incredible, as a smaller model cannot grasp sufficient complexities of the task at hand.

The concept of soft prompts was introduced by Lester et al. in the paper titled “The Power of Scale for Parameter-Efficient Prompt Tuning”, where they explored prepending learnable tokens to the inputs of frozen language models as such: The learnable tokens are passing conceptual notions to the model in an attempt to better understand the task at hand. The models represent words as numbers in a high-dimensional space. As such, we need not restrict our prompts to discrete words, and are able to search in the space between words to find the most suitable prompts to feed into the model.

These prompts are very efficient in terms of memory and compute, requiring just 0.2% of the size of a complete model checkpoint. They store fine-tuned model parameters and can achieve good results in less training time.

Two popular paraphrasic datasets were used in the soft prompt training of the models: ParaBank 2.0 and ParaNMT-50M. Both datasets were generated through an automatic translation of large amounts of bilingual textual data, translating a foreign language to English to obtain English-English paraphrase pairs.

For example, the ParaNMT-50M dataset used Czech-English parallel pairs and applied a Czech to English pretrained model for translation on the Czech pairs.

As the datasets are incredibly large, we utilised HuggingFace’s dataset streaming feature to feed training data into the model progressively.

The model was implemented using the OPT model provided by the HuggingFace team, organising the training logic with Pytorch Lightning, tracking the model performance with Weights and Biases, and multiple visualisations using Streamlit and Graphistry.

The implementation of the soft prompts follows nearly identical to the GitHub here, where the soft prompts are simply floated tensors duplicated from existing vocabulary and adding them to the module’s list of parameters to be considered backpropagatable tensors.

The relevant code snippet is shown below, and the full implementation is here: 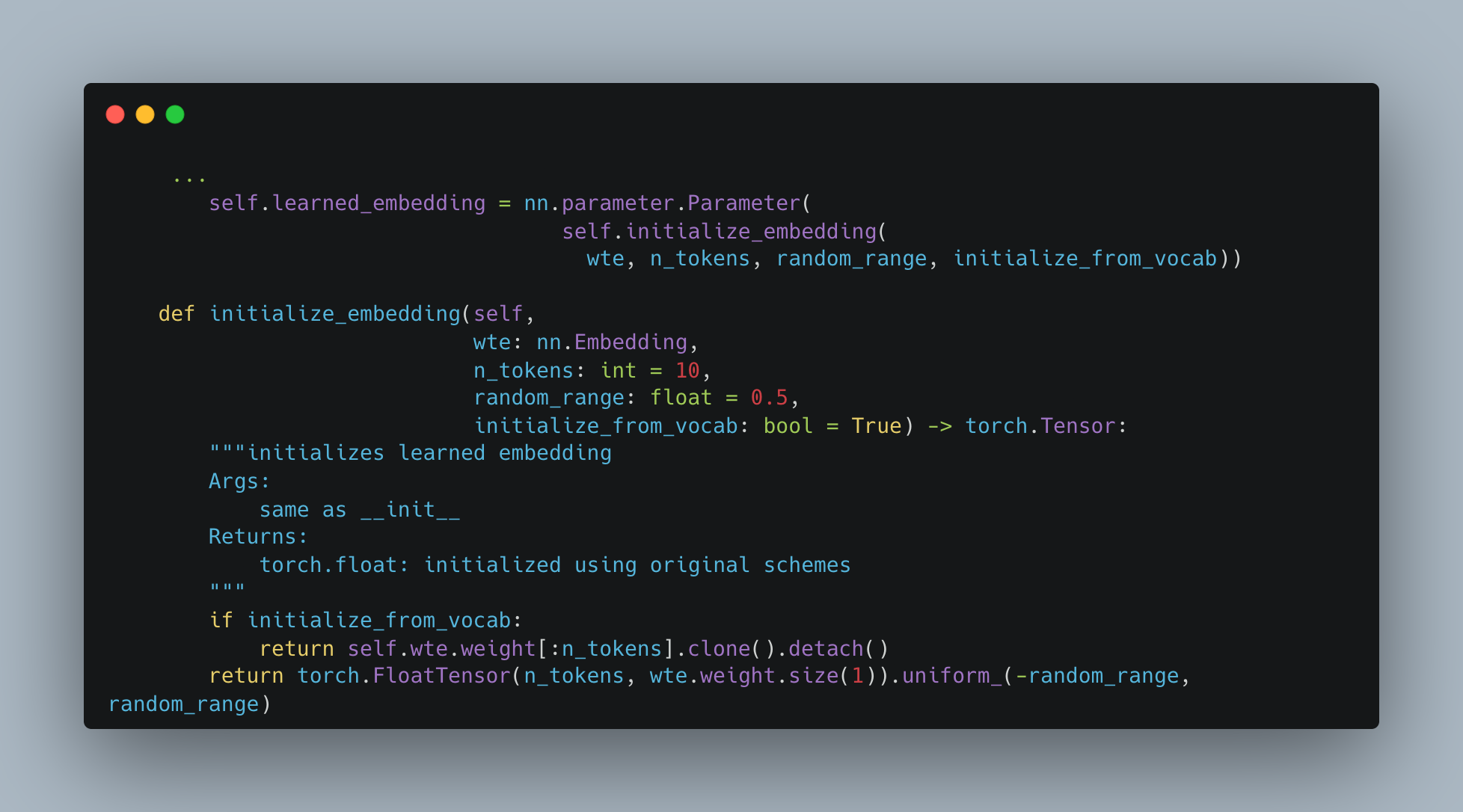 We then subclass the HuggingFace’s OPTForCausalLM class, initialise a new soft embedding and override the forward pass to prepend our learned embeddings in front of the input. 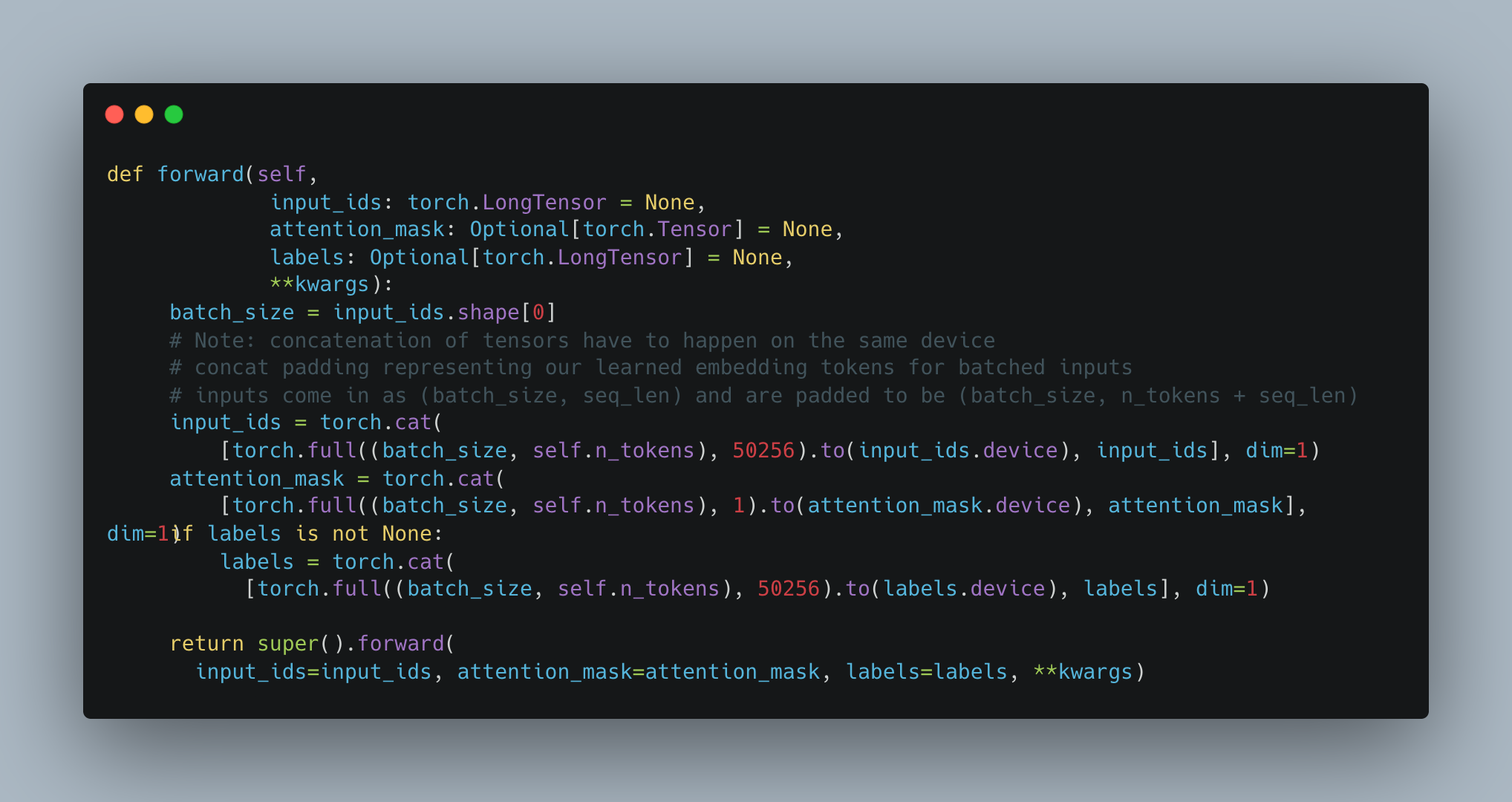 The training was done on the OPT1.3B variant and hyperparameter search for the optimal number of soft tokens using Optuna.

All models were trained for 8000 steps per epoch with a batch size of 32, and some early stopping was applied to prune underperforming models.

A few selected runs that show a very clear trend is as follows:

The models were allowed to run on a small subset of the dataset, and their outputs were saved. As expected, the results were not fantastic. The model is comparatively small, with only 1.3 billion parameters, and as such, soft prompt tuning will not achieve state-of-the-art performance. Nevertheless, it is observed that semantic similarity is maintained instead of the usual action of OPT continuing to generate the sentence. Unfortunately, the model is unable to comprehend that it should be paraphrasing, thus changing lexical components of the input. However, as the model size increases, it is reasonable to assume that the performance will get better. The following is a selection of some of the better-paraphrased results from the model:

The next question that comes to mind is: how do we evaluate their predictions?

In order to evaluate our model, we employ a few different metrics. Traditional metrics such as BLEU and ROUGE might not be suitable to evaluate our model directly as good paraphrases usually do not share the same vocabulary and thus will attain a lower ROUGE score, despite being semantically equivalent.

Many alternative metrics are available to tackle this problem, and one of them is BARTScore. BARTScore leverages a pretrained BART model for paraphrase generations to score sentence pairs. A generated sentence is scored by the BART model based on the probability that the model itself will generate the same sentence, gauging the quality of the paraphrased sentence according to how much the BART model agrees with it.

The next step will be to visualise the meaning of the soft prompts with respect to where they end up in the model’s embedding space. For example, in the original paper, it was found that clusters of the nearest neighbours maintained high lexical and semantic similarities and that several prompt tokens end up in the vicinity of each other.

The numerical representation of word tokens is of high dimensionality, and with the specific instance of OPT1.3B being used, has a hidden size of 2048 dimensions, incomprehensible to the human mind. While traditional methods such as PCA and TSNE can produce viable results, a lot of information is lost when decomposing a high-dimensional space into 2 dimensions for us to view. In addition, the TSNE algorithm is stochastic, and multiple restarts with different seeds can yield different embeddings. Hence, we have no way to compare two embedding spaces directly.

The visualisation below is produced through the use of a data structure known as a locality-sensitive hash forest and a graph visualisation tool graphistry. However, this technique does suffer from information loss and is even stochastic to a certain extent. We mitigate this issue by utilising the fixed embeddings as anchor points, such that they always end up in the same position in the visualisation (determined by an initial random seed), and then fitting the learned embeddings onto the generated anchor points.

Much of the results of this implementation agree with the conclusions of the original prompt tuning paper authors.

Furthermore, some exciting facets of exploration are:

Code is all available publicly on GitHub here: https://github.com/Clyde013/Paraphrase-OPT

You can read his article here: https://github.com/Clyde013/Paraphrase-OPT/blob/main/REPORT.md 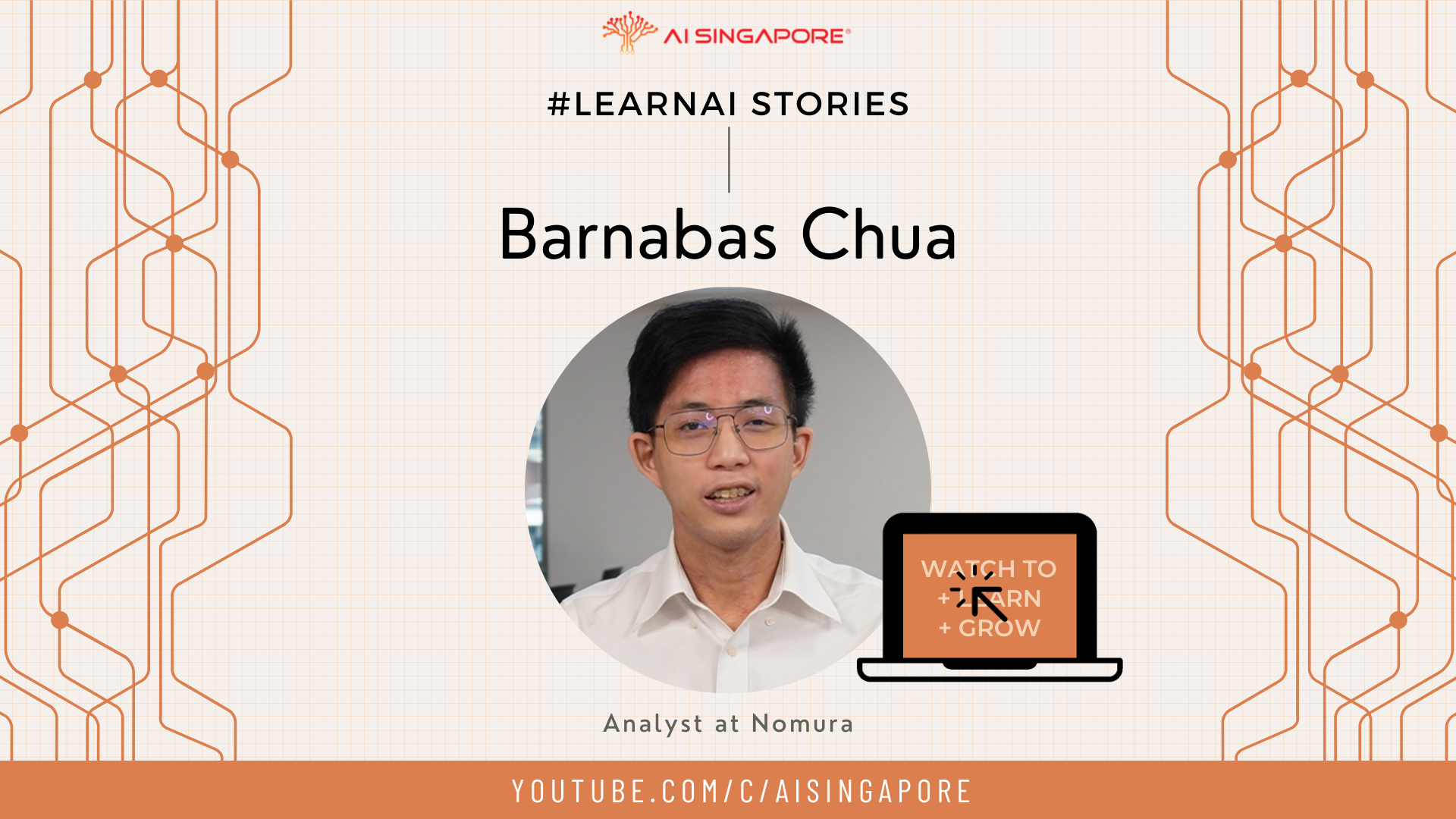